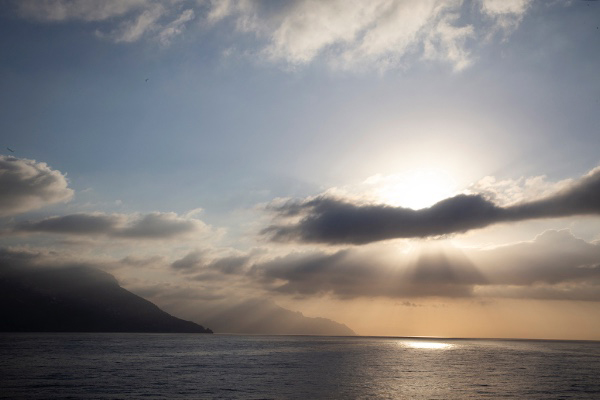 Finding purpose is important in every facet of life. They say the key to happiness is in fact, living with a clearly defined purpose. Do you find this to be true? Do you also photograph with purpose? Rather than simply using your camera as a tool to rapid fire and capture everything in your sight, do you stand back, reflect and decide, what is it I am wanting to portray with this photograph? What is the story and will this image stand the test of time? Our purpose is always to capture the story each family has to tell, rather than a simple snapshot of what everyone looks like at this particular time in history (although, that too has it’s own purpose!)… We believe there is no right or wrong way to shoot, however, mindfulness is important with everything and photography is no exception…. 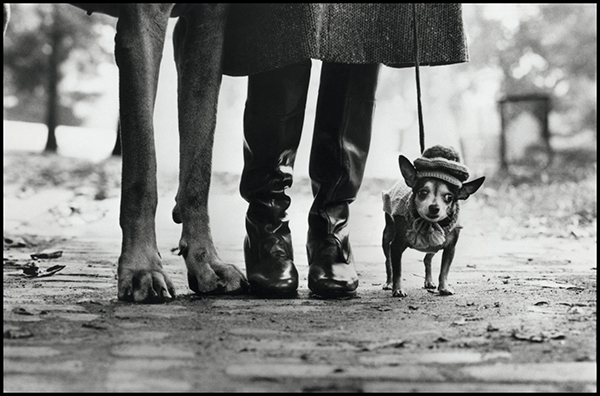 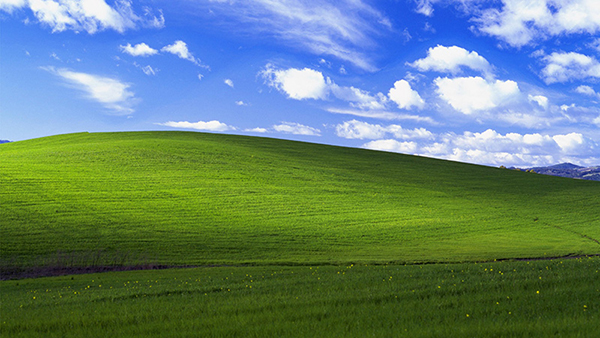 “The most viewed photograph in history is the Windows XP’s default wallpaper called “Bliss” Bliss was taken in 1996 (years before Windows XP was launched) in Sonoma County, California by an American photographer Charles O’Rear. He snapped the picture on film with a medium-format camera. Although many claim that the photo was digitally manipulated, O’Rear claims it never was. Right now the landscape looks different – grapevines were planted on the hill so now Bliss is impossible to duplicate.” SOURCE 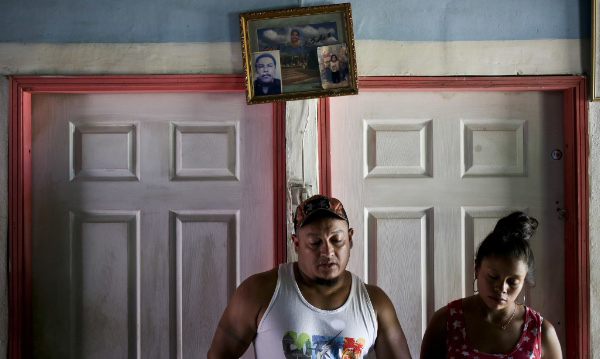 “La Libertad, Honduras:
Rolando Bueso Castillo and his wife Adalicia Montecinos at their home. This week, the couple were reunited with their infant son Johan, who was separated from Bueso Castillo at the Texas border in March and sent to a shelter in Arizona
Photograph: Esteban Félix/AP”
SOURCE 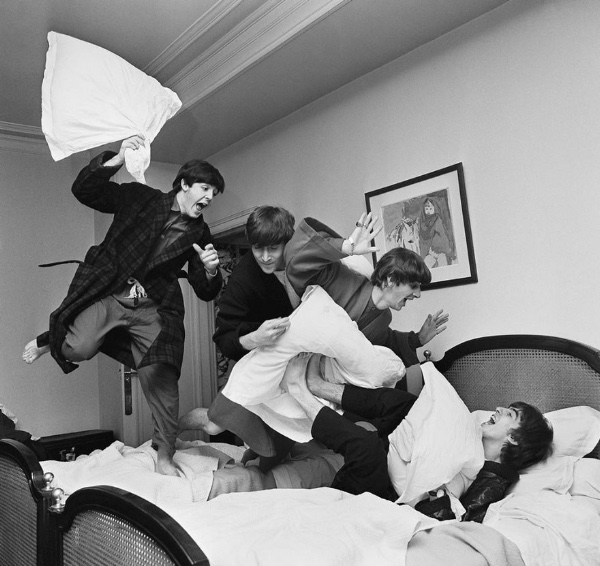 “Harry Benson didn’t want to meet the Beatles. The Glasgow-born photographer had plans to cover a news story in Africa when he was assigned to photograph the musicians in Paris. “I took myself for a serious journalist and I didn’t want to cover a rock ’n’ roll story,” he scoffed. But once he met the boys from Liverpool and heard them play, Benson had no desire to leave. “I thought, ‘God, I’m on the right story.’ ” The Beatles were on the cusp of greatness, and Benson was in the middle of it. His pillow-fight photo, taken in the swanky George V Hotel the night the band found out “I Want to Hold Your Hand” hit No. 1 in the U.S., freezes John, Paul, George and Ringo in an exuberant cascade of boyish talent—and perhaps their last moment of unbridled innocence. It captures the sheer joy, happiness and optimism that would be embraced as Beatlemania and that helped lift America’s morale just 11 weeks after John F. Kennedy’s assassination. The following month, Benson accompanied the Fab Four as they flew to New York City to appear on The Ed Sullivan Show, kick-starting the British Invasion. The trip led to decades of collaboration with the group and, as Benson later recalled, “I was so close to not being there.” SOURCE 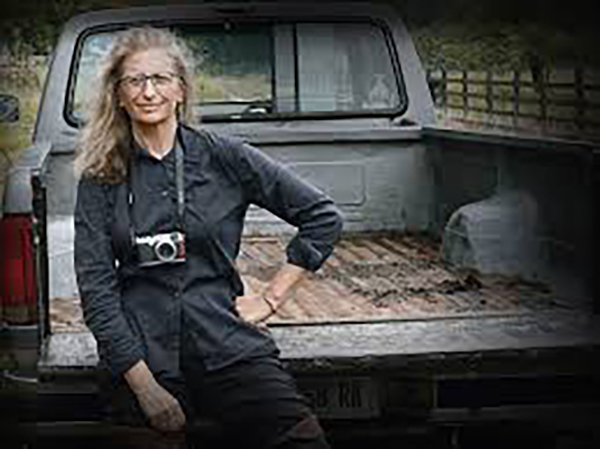 Annie began creating posed, conceptual photographs in the late 1970s, when she was making portraits for the cover of Rolling Stone. Her earlier work for the magazine was primarily reportage—observations of what was happening in front of her. Covers provided an opportunity for something different—a photograph that would convey a more specific comment on the subject’s life and work. This kind of portrait has both literal and allusive aspects. When Annie shot the comedian Whoopi Goldberg, she photographed her in a bathtub full of warm milk. Goldberg’s dark limbs and face emerge from a white sea. It is a startling image based on Goldberg’s heartrending, politically charged impersonations of a little black girl scrubbing her skin in the hope that she will become white.

Conceptual portraits are driven by an idea. Somewhere in the raw material of information about who the subject is and what he does is the nucleus of what the picture will become. It doesn’t have to be a big idea. It can be simple. For Annie, the series of portraits of poets she made for Life magazine in 1980 established a method of working that successfully accomplished what she was aiming for. Robert Penn Warren had been writing about death. His poems were infused with the fleshiness and fragility of living things. Her portrait of Penn Warren sitting on his bed, his shirt off, conveys that.

The key thing about a conceptual portrait is its connection to the subject. The idea begins with the person.” 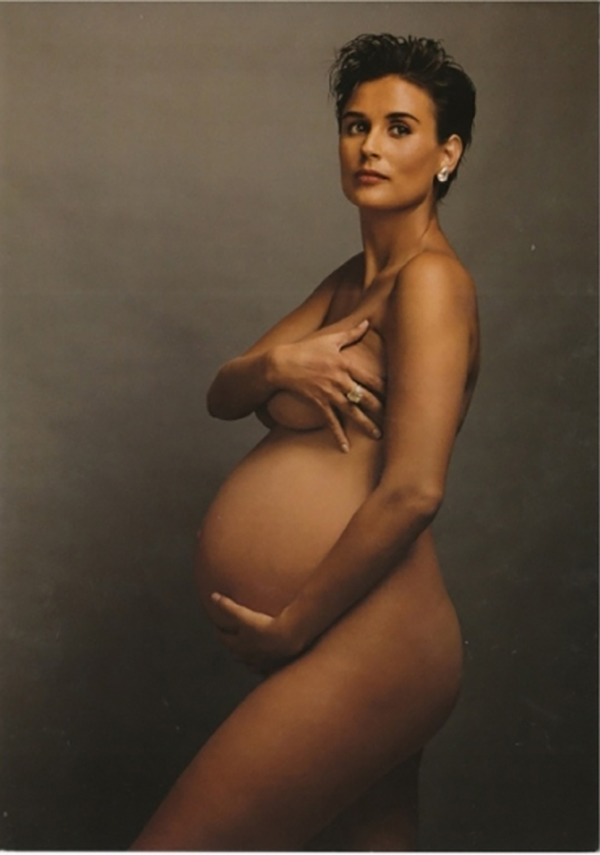 "When Leibovitz photographed the movie star for the cover of Vanity Fair in August, 1991, editors at the magazine were concerned about how to hide the actress’ seven-month-pregnant figure. Accordingly, they asked that Leibovitz shoot a tightly cropped portrait of Moore’s face. Leibovitz spent a day trying to adhere to their directive before suggesting that Moore — with whom she had a close relationship — disrobe. The arresting, unapologetic results led to one of the most discussed magazine covers in history. For her part, Leibovitz is skeptical of the photo’s quality. In 2012, she said: “It was a popular picture and it broke ground, but I don’t think it’s a good photograph per se. If it were a great portrait, she wouldn’t be covering her breasts. She wouldn’t necessarily be looking at the camera.” SOURCE 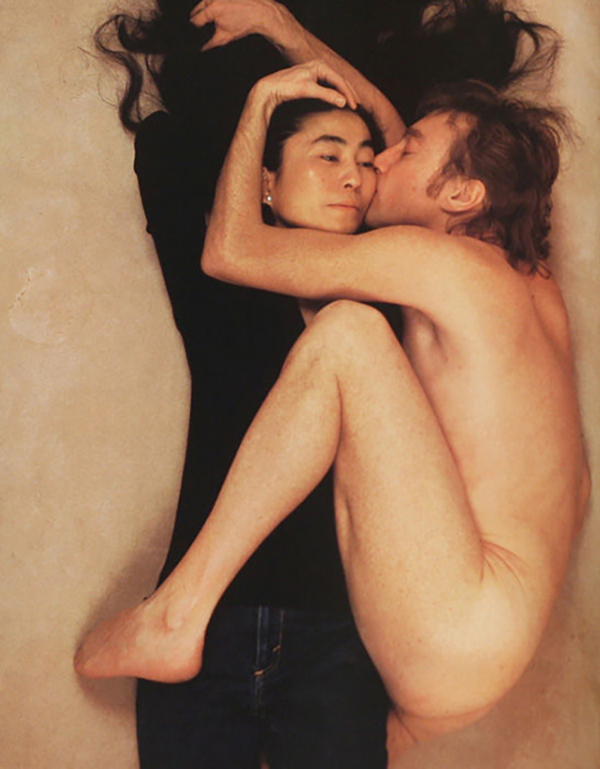 "On December 8, 1980, Leibovitz was commissioned by Rolling Stone to photograph John Lennon and Yoko Ono, as part of the promotional efforts surrounding their joint album Double Fantasy. While Leibovitz had hoped that both Lennon and Ono would pose nude, Ono was uncomfortable with shedding her clothes. But Ono’s reluctance led to a legendary improvisation. Of the experience, Leibovitz has said: “I was kinda disappointed, and I said, ‘Just leave everything on.’ We took one Polaroid, and the three of us knew it was profound right away.” Later that evening, Lennon was shot and killed outside of his New York City apartment building. The magazine ran the haunting image (sans headlines) as its cover the following month." SOURCE 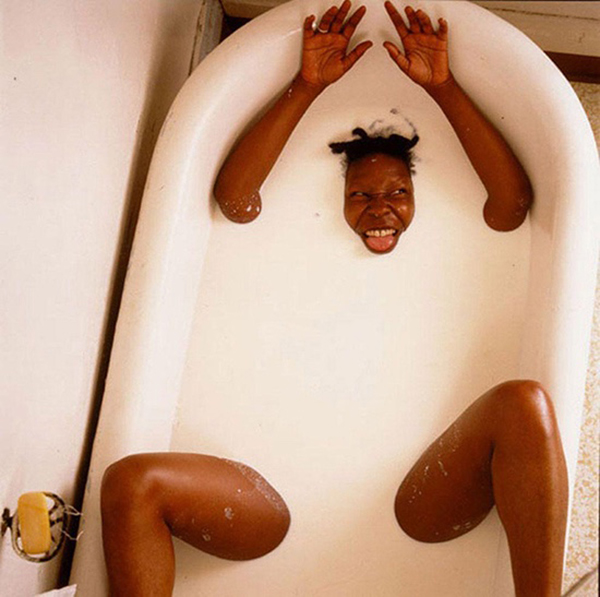 "In 1984, Whoopi Goldberg was an up-and-coming comedian who was drawing comparisons to Richard Pryor and Lenny Bruce for her raw, racially charged routines. Assigned by Vanity Fair to photograph the young talent, Leibovitz was inspired by a poignant Goldberg set piece that joked about using Chlorox in an attempt to bleach her skin. Leibovitz decided to use milk for the portrait, after a friend in advertising advised that it registers as a true, opaque white in photographs. While the picture’s political implications were deliberate and intentional, Goldberg’s exuberant pose was not: the actress slipped as she was getting into the milk-filled bathtub. Of the moment, Leibovitz has said: “And I went, oh, my goodness, this is graphically amazing and interesting.” SOURCE 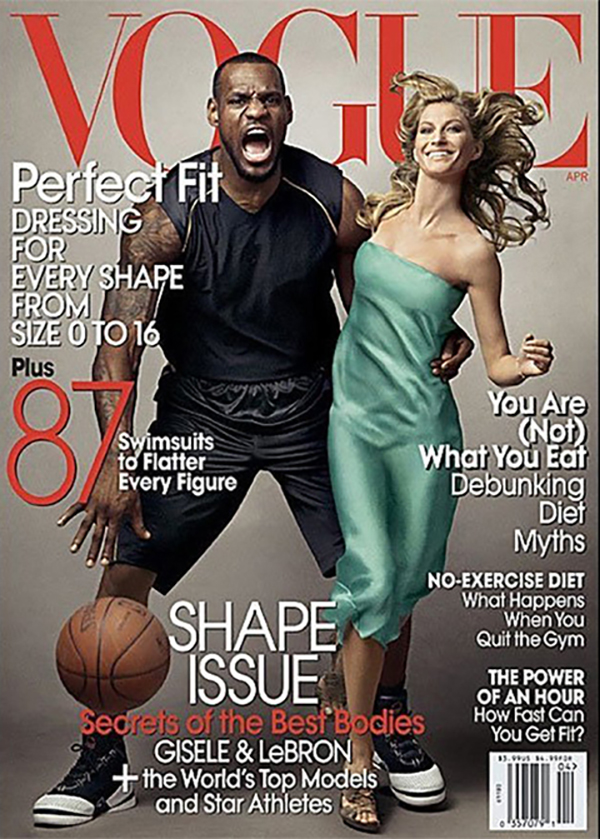 "The April 2008 cover of Vogue paired supermodel Gisele Bundchen with basketball wunderkind LeBron James in a Leibovitz image that, to a casual observer, simply looked like a clever, casual fashion photograph. But closer readers noticed that, in the image, Leibovitz had quoted visual references from the 1933 version of King Kong, recasting James as the titular character and reimagining Bundchen — right down to bias-cut silk gown — as a modern-day Fay Wray. Critics were divided. One camp maintained that Leibovitz and Voguewere recklessly propagating disturbing racial stereotypes, while others suggested that it was a progressive upending of said tropes. Leibovitz, for her part, has remained mum on the issue." SOURCE 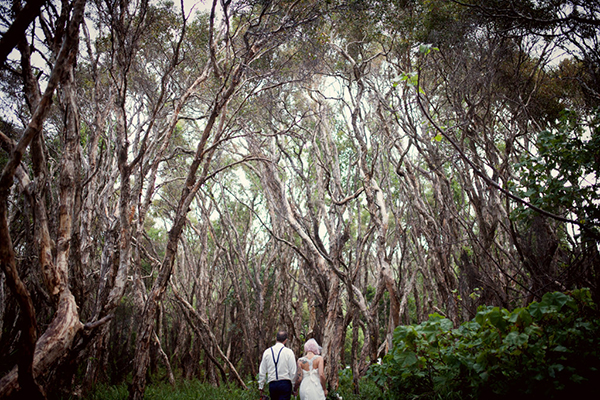 “You have to be prepared— to have an idea of who you are photographing and what they do.”

How prepared are you before each shoot? Could you be doing even more research or location scouting? 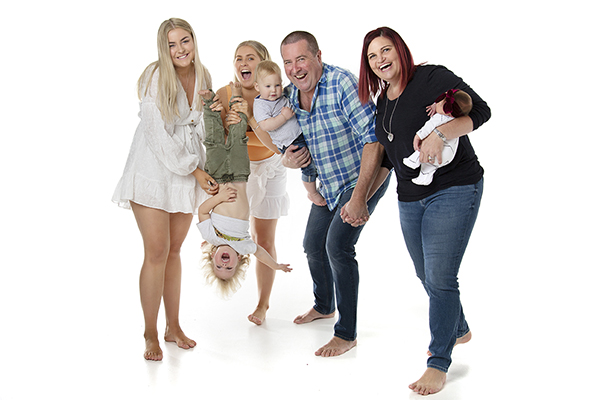 The beautiful Fraser family adorned our studio again this month for their third photo shoot with baby Halo as the newest and precious family member. We first met Sharn, Craig, Lucinda and Jazmine in 2016 when Harlan was born. Olivia then captured portraits when Jagger was born a year later (while I was off on honeymoon – a year ago!)… This is exactly why we love what we do and feel very privileged to meet such amazing families on their own journey through life. You are a fun and beautiful family Team Fraser and I can’t wait to see what’s in store for you next! Big hugs and love from us! X 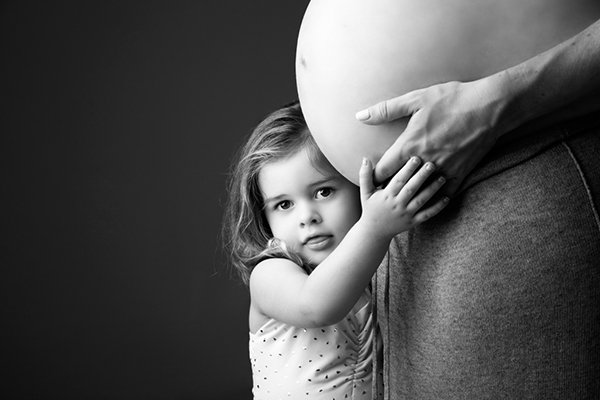 How to tell a story with portraits by using creative composition…
“Creative compositions should be a vehicle for a purpose – an emotion or a story you want to evoke in the image. If you choose to add creativity to your images, just to be more creative, it will be an empty gimmick.”

1. Half close up portrait – A full story
“By showing only half of a close-up portrait, you stimulate the viewer’s mind and almost force it to delve into the image. We do so by activating their mind’s need to fill in gaps of missing information. This ability is rooted in us since ancient times, from which we evolved to understand that the two blurry spots between the trees, could be the hidden face of a tiger.”

2. Environmental Portrait – A person in context
“For me, this the most challenging and rewarding portrait framing style, the environmental portrait. This shows not only the person, which is the hero of your image, but also his or her environment: home, work place, country, etc. By doing so, you use the mind’s ability to conclude and understand a situation by connecting pieces of information.”

3. Detail Portrait – telling the story with small details
“Like with the half portrait technique, in the detail framing we use the brain’s ability to fill in the gaps, by showing only a small fraction of the entire story. For a good detail shot, choose some with a connection to your subject. It can be a connection of similarity or difference. For example: take a close-up shot of his or her hands, shoes, the reading books on the shelf, the subject’s regular chair or smoking pipe, you name it! As long as this object, represent something which is bigger than the object itself.” 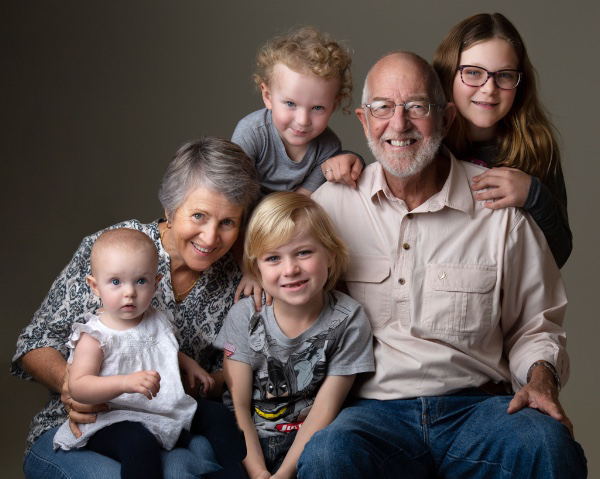 “Photographing the people close to you, the people who will put up with you, is probably the most rewarding work you will do. It may never be published, but it is the work that you should care about most and embrace.”

This is a portrait of my beautiful parents and their four amazing grandchildren. I couldn’t love my family more if I tried! I think we need an updated portrait with EVERYONE!! X