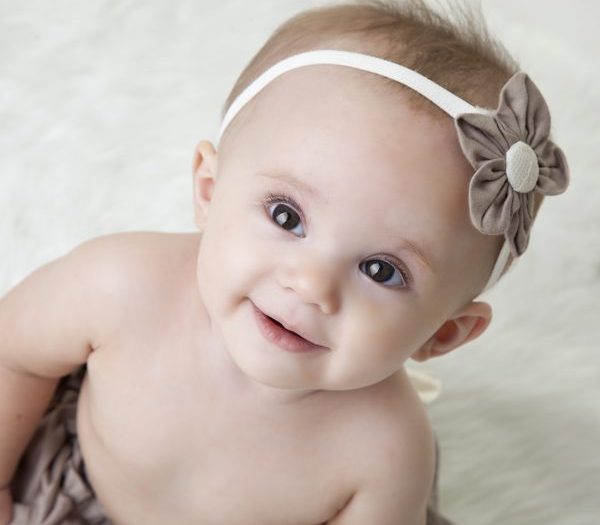 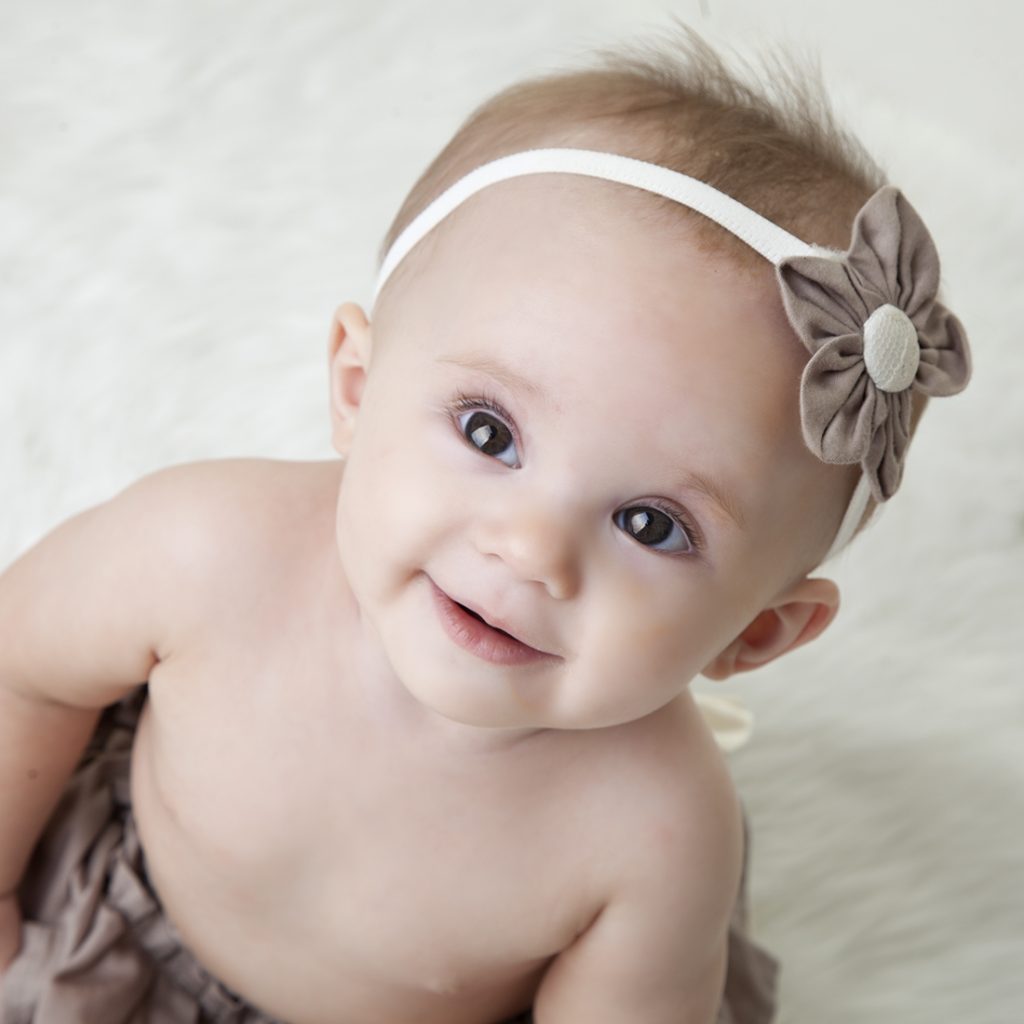 Look up to the sky tonight. The air will be clear and the moon will be full. Have you ever tried to photograph the moon? I must admit, I haven’t tried properly and have always been fascinated with astronomy (and astrology – don’t tell anyone!). I’ve researched some of the most reputable Astrophotographers from around the globe to gather their best tips for photographing the night sky. Enjoy! X

… Just as I’ve written this, the radio mentioned that it’s been 50 years since the first moon landing this week – WEIRD TIMING! 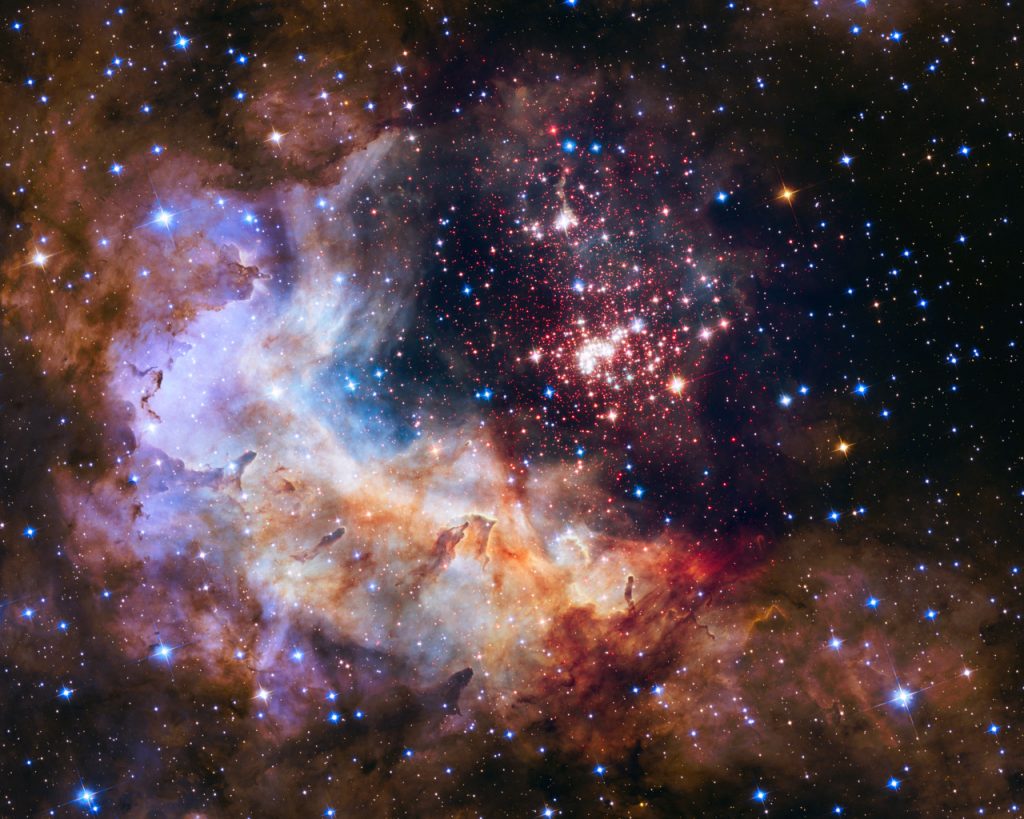 This NASA/ESA Hubble Space Telescope image of the cluster Westerlund 2 and its surroundings has been released to celebrate Hubble’s 25th year in orbit and a quarter of a century of new discoveries, stunning images and outstanding science. The image’s central region, containing the star cluster, blends visible-light data taken by the Advanced Camera for Surveys and near-infrared exposures taken by the Wide Field Camera 3. The surrounding region is composed of visible-light observations taken by the Advanced Camera for Surveys.

“Astrophotography is photography of astronomical objects, celestial events, and areas of the night sky. The first photograph of an astronomical object (the Moon) was taken in 1840, but it was not until the late 19th century that advances in technology allowed for detailed stellar photography. Besides being able to record the details of extended objects such as the Moon, Sun, and planets, astrophotography has the ability to image objects invisible to the human eye such as dim stars, nebulae, and galaxies. This is done by long time exposure since both film and digital cameras can accumulate and sum light photons over these long periods of time.

Photography revolutionized the field of professional astronomical research, with longtime exposures recording hundreds of thousands of new stars and nebulae that were invisible to the human eye, leading to specialized and ever larger optical telescopes that were essentially big cameras designed to record light using photographic plates. Astrophotography had an early role in sky surveys and star classification but over time it has given way to more sophisticated equipment and techniques designed for specific fields of scientific research, with image sensors becoming just one of many forms of sensor.[1]

Today, astrophotography is mostly a subdiscipline in amateur astronomy, usually seeking aesthetically pleasing images rather than scientific data. Amateurs use a wide range of special equipment and techniques.” 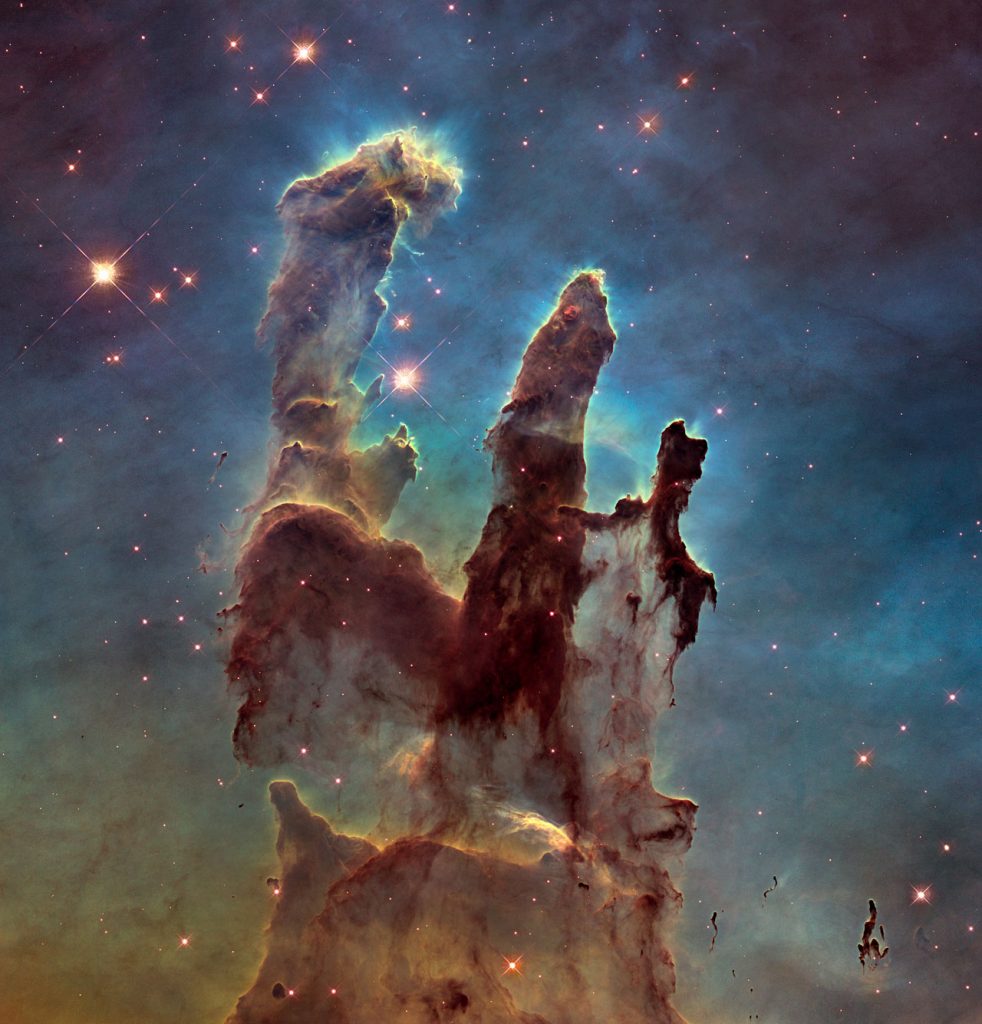 The NASA/ESA Hubble Space Telescope has revisited one of its most iconic and popular images: the Eagle Nebula’s Pillars of Creation. This image shows the pillars as seen in visible light, capturing the multi-coloured glow of gas clouds, wispy tendrils of dark cosmic dust, and the rust-coloured elephants’ trunks of the nebula’s famous pillars. The dust and gas in the pillars is seared by the intense radiation from young stars and eroded by strong winds from massive nearby stars. With these new images comes better contrast and a clearer view for astronomers to study how the structure of the pillars is changing over time.

“The first known attempt at astronomical photography was by Louis Jacques Mandé Daguerre, inventor of the daguerreotype process which bears his name, who attempted in 1839 to photograph the Moon. Tracking errors in guiding the telescope during the long exposure meant the photograph came out as an indistinct fuzzy spot.” 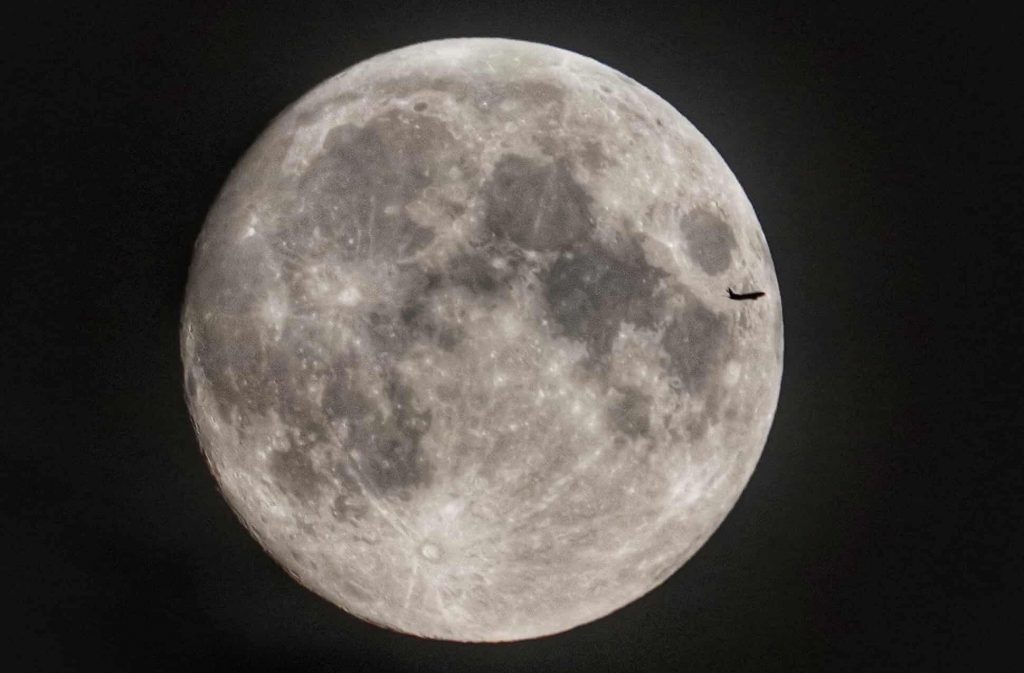 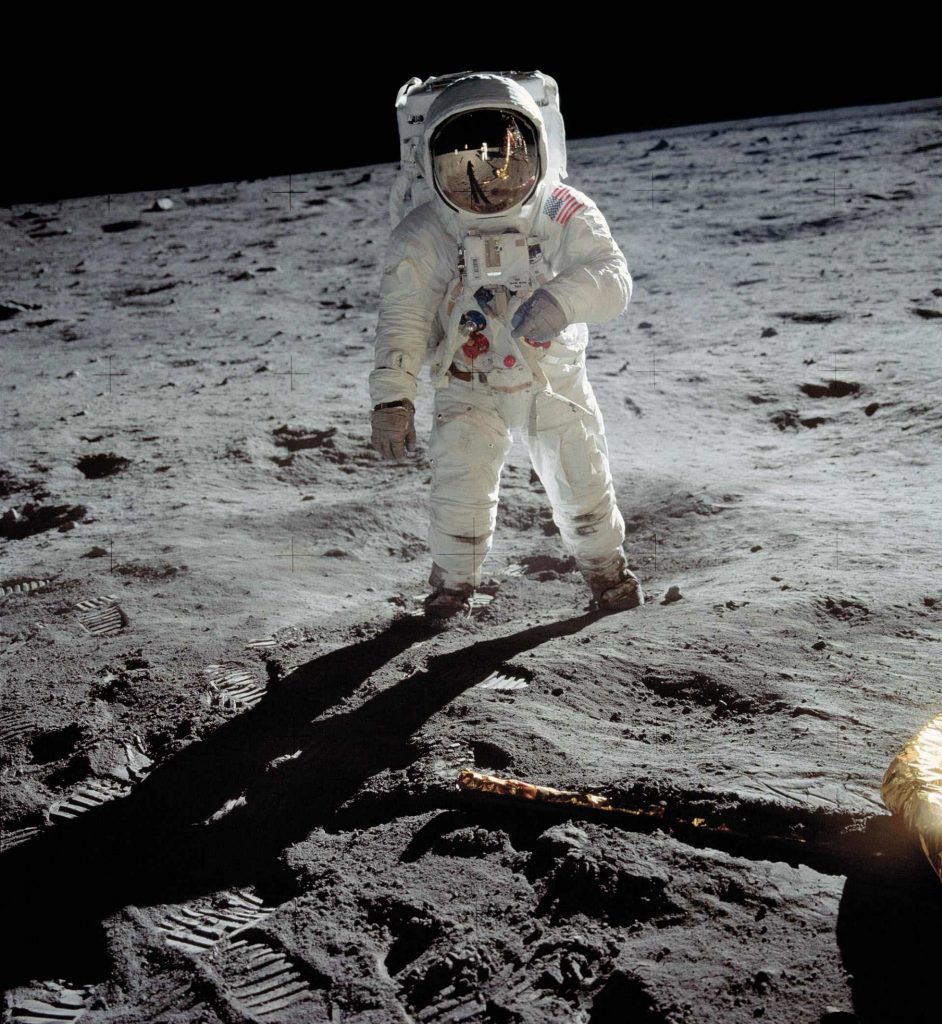 “Somewhere in the Sea of Tranquillity, the little depression in which Buzz Aldrin stood on the evening of July 20, 1969, is still there—one of billions of pits and craters and pockmarks on the moon’s ancient surface. But it may not be the astronaut’s most indelible mark.

Aldrin never cared for being the second man on the moon—to come so far and miss the epochal first-man designation Neil Armstrong earned by a mere matter of inches and minutes. But Aldrin earned a different kind of immortality. Since it was Armstrong who was carrying the crew’s 70-millimeter Hasselblad, he took all of the pictures—meaning the only moon man earthlings would see clearly would be the one who took the second steps. That this image endured the way it has was not likely. It has none of the action of the shots of Aldrin climbing down the ladder of the lunar module, none of the patriotic resonance of his saluting the American flag. He’s just standing in place, a small, fragile man on a distant world—a world that would be happy to kill him if he removed so much as a single article of his exceedingly complex clothing. His arm is bent awkwardly—perhaps, he has speculated, because he was glancing at the checklist on his wrist. And Armstrong, looking even smaller and more spectral, is reflected in his visor. It’s a picture that in some ways did everything wrong if it was striving for heroism. As a result, it did everything right.” 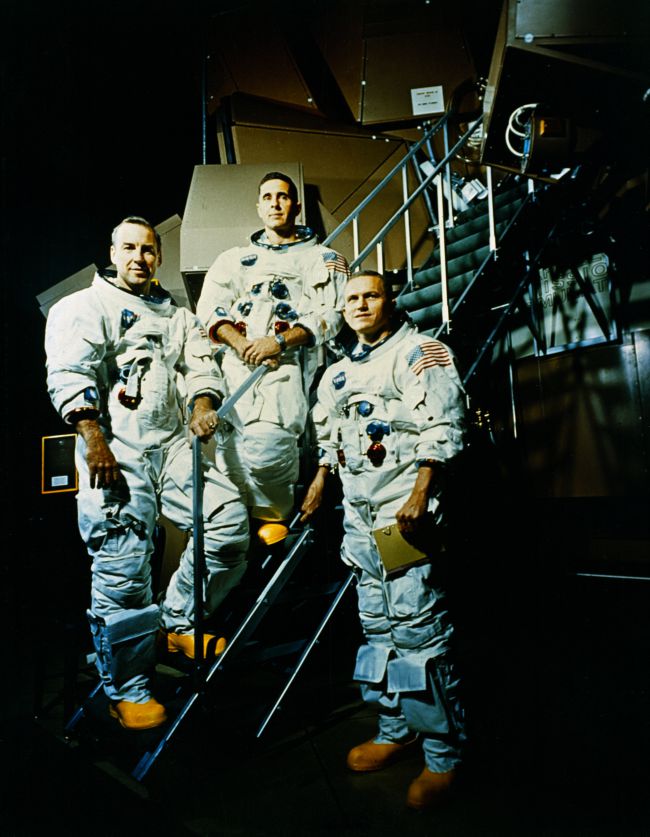 “On Dec. 24, 1968, Bill Anders orbited the moon as lunar module pilot with the Apollo 8 crew on humanity’s first voyage to another world. It was he who took the iconic Earthrise photo on Christmas Eve, a gift of perspective in a turbulent year. Here, Anders reflects on Apollo 8’s historic flight, Earthrise and the impact a photograph can have for Space.com’s Expert Voices: Op-Ed & Insights.

Fifty years ago today, I was part of a crew of three men orbiting the moon, cocooned inside a 13-foot by 11-foot space capsule. Inside, there wasn’t much space at all. Outside, the immensity of our galaxy boggled our minds and dazzled our eyes.

Despite substantial risks in moving up the launch date in order to get ahead of the Soviet Union’s space program, we set world records for speed, altitude, and distance. We became the first humans to leave low-Earth orbit, and to orbit another celestial body. Ours were the first human eyes to see the far side of the moon. Months later, Apollo 11’s Neil Armstrong and Buzz Aldrin walked on the lunar surface.

The audacious nature of what NASA achieved in winning the space race remains unsurpassed. Those efforts fueled further progress that continues today, often through private enterprise. NASA demonstrated how American ingenuity could overcome nearly any obstacle.” 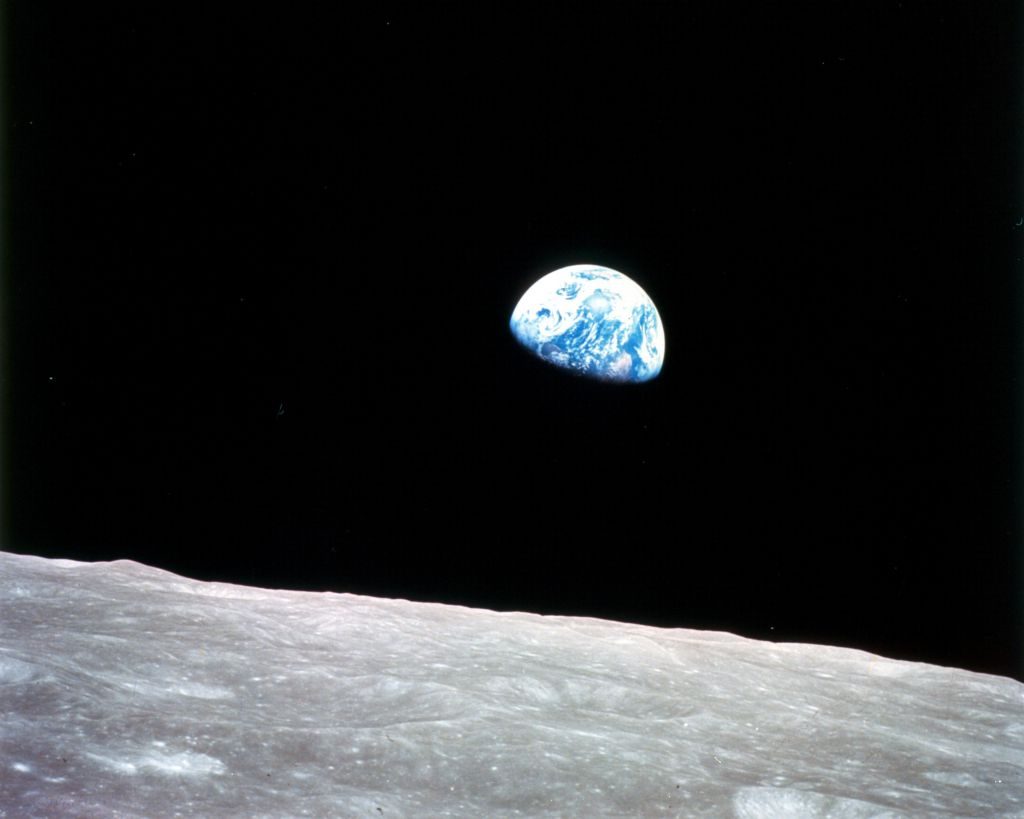 Photo Credit Above: Earthrise: This iconic view of the Earth rising above the lunar surface was captured by Apollo 8 lunar module pilot Bill Anders during the first human voyage around the moon on Dec. 24, 1968. Anders flew around the moon with Apollo 8 commander Frank Borman and command module pilot Jim Lovell.
(Image: © NASA) 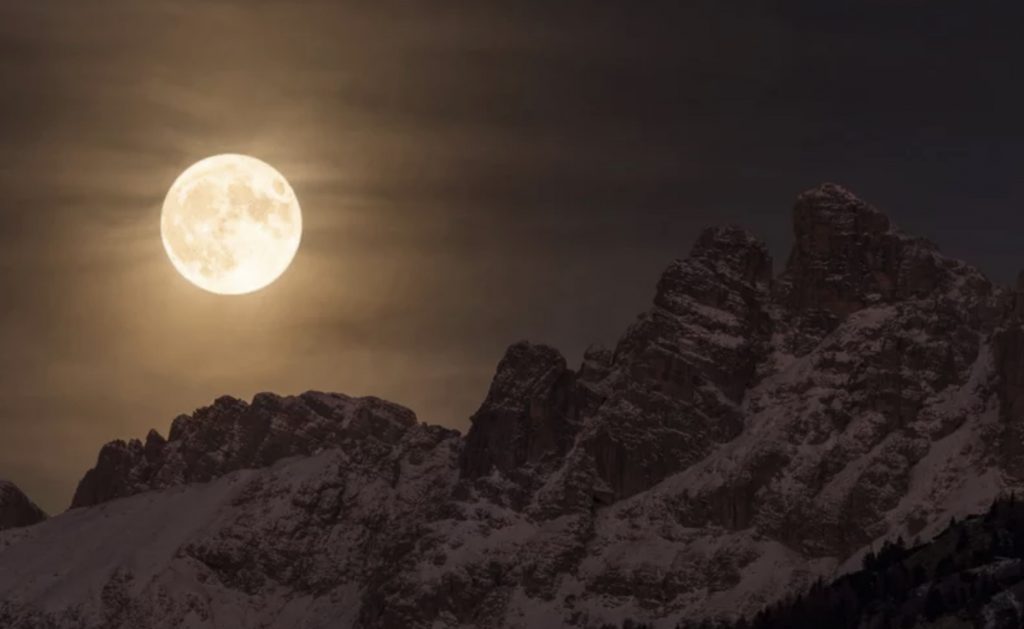 The light from a distant star can take thousands of years to reach Earth. That means astrophotography — images of the night sky — is the closest thing we may have to a time machine. The best astrophotography is breathtakingly beautiful to boot.”

“The magnificent sight of the Super Moon illuminating the night sky as it sets behind the Marmarole, in the heart of the Dolomites in Italy. On the night of 14 November 2016, the Moon was at perigee at 356,511 km away from the centre of Earth, the closest occurrence since 1948. It will not be closer again until 2034. On this night, the Moon was 30% brighter and 14% bigger than other full moons.

SEE THE MOST AMAZING PHOTOS OF THE NIGHT SKY HERE! 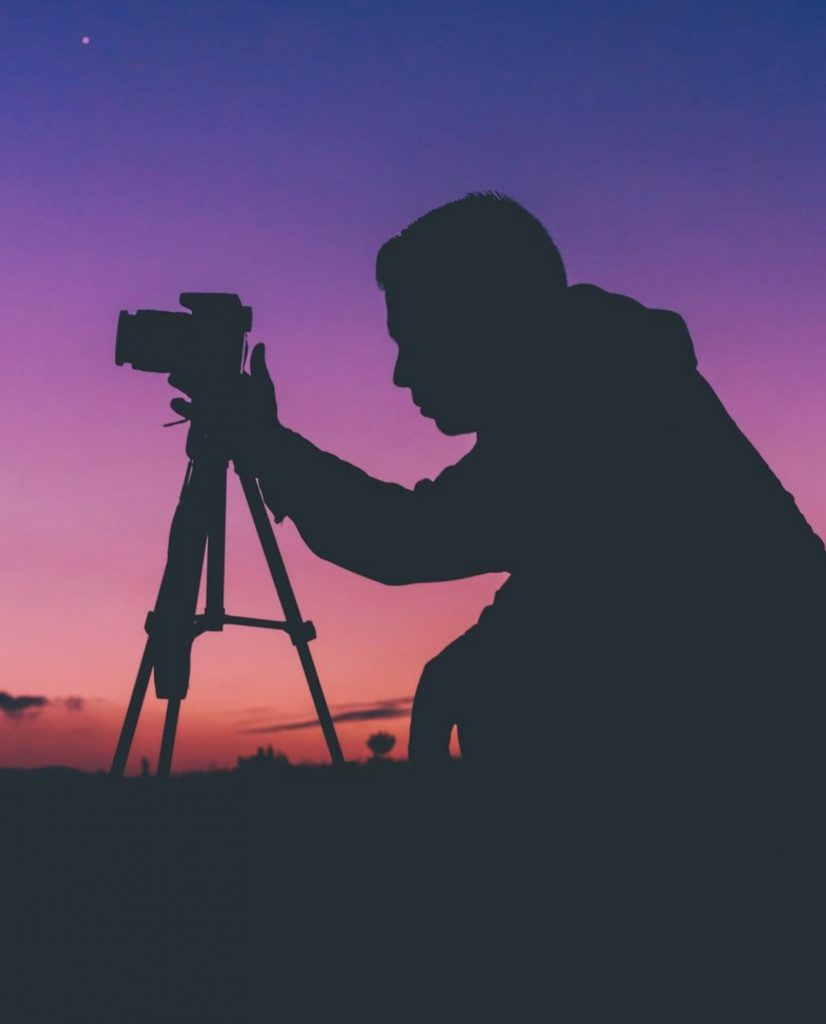 So… How to create amazing photos like the ones above?

“Taking pictures at night can be quite challenging for beginners. It requires you to manipulate ISO, aperture, and shutter speed among many other things. Follow these eight useful techniques to help you shoot in the dark. Once you learn the basics, you’ll find out that night photography is really fun. Don’t be afraid to experiment and you’ll be rewarded with stunning images you’ll be proud of.” 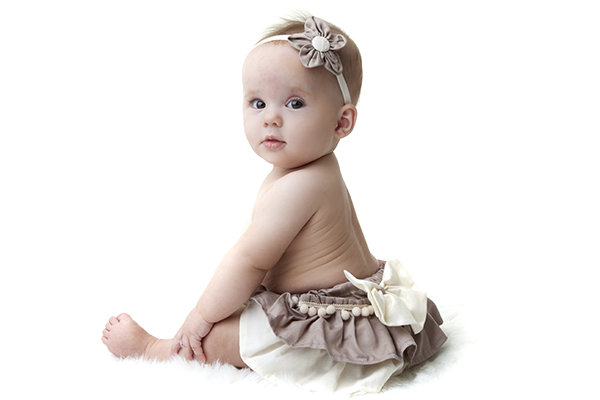 I had the pleasure of meeting Sarah and Nathanial for an adorable family portrait experience with their beautiful daughter Emily (above and in cover photo). They were married not long after this photo shoot, a bright future ahead. A few months ago I was invited into their home for an important but less joyful photo shoot. While they had exciting news of welcoming a baby brother for Emily into the world. They had also received the crippling news that Nathanial had developed a severe form of Motor Neurone disease . His diagnosis was received at the end of 2017 and a short 18 months later, he was totally bed bound. Sarah wanted the opportunity for a family portrait together with the four of them in their home. Even though Nathanial was in pain and was worried that he wouldn’t be able to participate for long… the joy was clear in his eyes when he was holding his son, and being hugged fiercely by his daughter and wife. Only 34 years of age, Nathanial is finally at peace this week and we’ll be attending the memorial service tomorrow. My heart is broken for Sarah and their whole family and I feel very privileged to have met this kind hearted man. So, look up to the stars tonight and have this beautiful grieving family in your thoughts. X 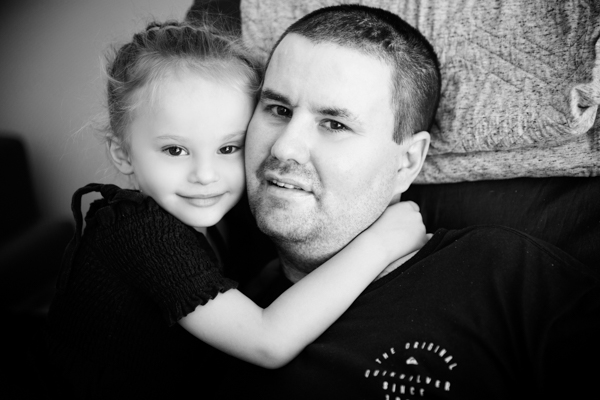 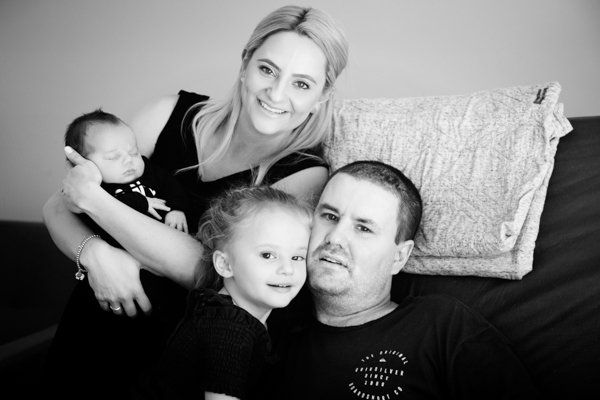 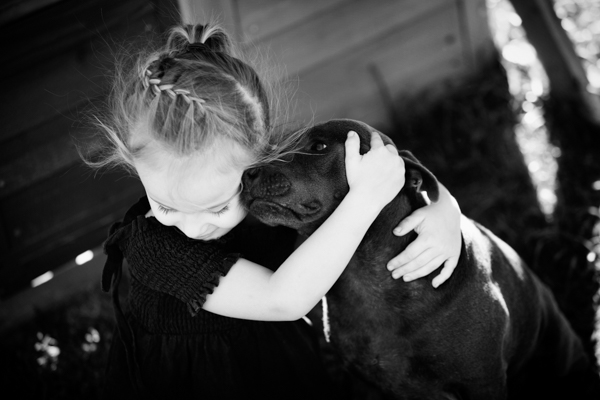 Wishing everyone a safe and thoughtful week ahead – looking at the moon (and maybe photographing it too). X